Munich, September 05, 2020 – In the summer of 2020, the lightning monitoring network of the renowned Munich-based lightning detection company nowcast registered exactly 2,659,493 lightning discharges throughout Germany, 732,199 of them with a current intensity of at least 5 kA. This is the lowest value since the beginning of modern lightning detection. The state with the highest number of lightning discharges was Bavaria, the smallest state of the Federal Republic of Germany, Bremen, is in last place. Since 2006, the experts have been using their high-precision lightning detection system LINET (Lightning Detection Network) to record ground and cloud lightning in large parts of the world and also supply their data to the DWD. nowcast is the lightning specialist of the UBIMET Group.

From June 1 to August 31, nowcast’s high-precision lightning measurement system registered exactly 2,659,493 lightning discharges (cloud and earth lightning) all over Germany, 732,199 of them with a current of at least 5 kA. This value represents the lowest value since the start of the measurement. This summer there were a good 500,000 lightning discharges less than in the summer of the previous year. Compared to the average from 2009 to 2019, less than half of the usual number of lightning discharges was recorded this summer. The second lowest value is from summer 2018, when about 868,500 lightnings with a current of at least 5 kA were detected, so we have experienced the two weakest thunderstorm seasons within the last three years. “Especially in July, there were exceptionally few thunderstorms this year. In the normally thunderiest month of the year, for example in Saarland, not a single lightning was detected” says Richard Fellner, CEO of nowcast. Germany-wide it thunderstormed however nevertheless on 73 of 92 days somewhere in the federal territory: “While there were only 12 days with lightning discharges in Hamburg, there were 61 in Bavaria”, so the expert.

The force of lightning is indicated by the current in the unit Ampere. The strongest lightning in the country was measured in Bavaria in the district of Roth: “The front-runner is a discharge of around 402 kA in Thalmässing on the night of July 2,” the expert said. “In a very short time, a current intensity 25,000 times higher than that available in a standard household socket with 16 amperes was reached.

By far the most stormy day of the summer was June 13, when about 450,000 lightning discharges were recorded, 133,000 of them in Brandenburg and 110,000 in Lower Saxony alone. In second and third place, respectively, came June 26 with 160,000 lightning discharges and August 11 with 146,000. This year’s thunderstorms were mainly responsible for local heavy rain and flooding, for example, in Bottmersdorf (Saxony-Anhalt) on June 13, 100 L/m² of rain fell in less than 5 hours. Similarly large amounts of rain of more than 80 L/m² in two hours were recorded in Nattheim (Baden-Württemberg) on August 2 or in Twist (Lower Saxony) on August 14. Large hail with a diameter of >3 cm was only sporadic, such as locally on June 13 in Brandenburg. Hurricane gusts were also measured only sporadically, the highest peak being 130 km/h in Chieming on June 28. 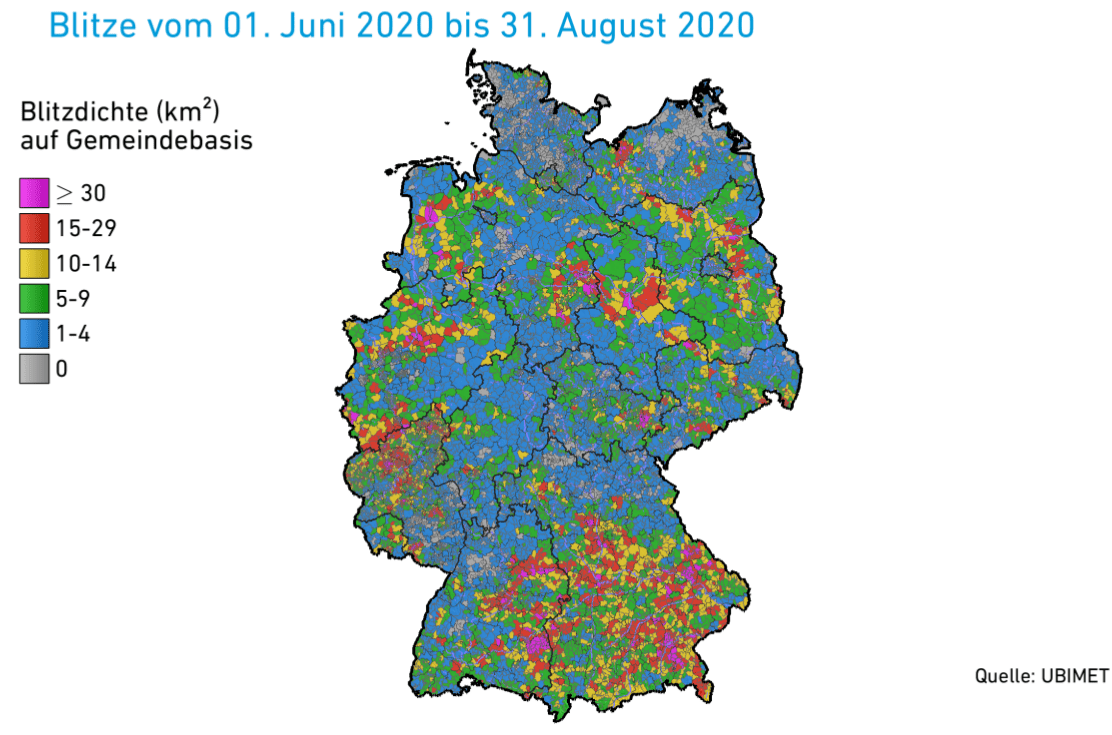 The special thing about nowcast

The lightning location system LINET, developed at the Ludwig-Maximillians-University in Munich and made famous by its patented 3D algorithm, has become a premium supplier in its sector within a very short time. Due to the continuous development of the technology, the precision with which nowcast can locate lightning and thunderstorms is unique. The lightning measurement is generally based on the detection of electromagnetic waves. As soon as a certain intensity is exceeded, the measuring system registers the lightning. A lightning is detected by several sensors and a mathematical algorithm calculates the location based on the reported data with an average accuracy of 75 meters. In Germany nowcast records its lightning data with 30 sensors, Europe-wide with more than 170 and worldwide with more than 600 sensors. Among the numerous, long-standing customers in Germany are the German Meteorological Service (DWD), damage insurers such as Allianz, the Geoinformation Center of the German Army, as well as worldwide national weather services, energy suppliers, aerospace, open air organizers, amusement parks, golf courses, shipping and airports. nowcast not only provides its customers with real-time lightning data and their analysis, but also enables them to purchase their own independent, reliable lightning location system “LINET systems” with hardware and software.

Why ultra-precise lightning and thunderstorm monitoring pays off 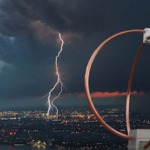