Why ist LINET so precise?

nowcast has succeeded in perfecting the Time-of-Arrival (TOA) method to the point where strokes are located with a statistical accuracy of 75 meters (mean value, low scattering). Calculating the geographical position of a lightning stroke entails an unavoidable degree of uncertainty for physical reasons. Irrespective of the fact that every lightning stroke also features a certain expansion, with respect to cloud-to-ground strokes, the point of the return stroke is measured, which is situated approximately 100 meters above the ground. Thanks to the expert alignment of several parameters, nowcast has been able to hone the location accuracy within the core region (almost all of Europe) down to a mean error of 75 meters. This value is regularly verified and confirmed via comparison with confirmed strikes into towers whose exact geographical positions are known.

A high degree of location accuracy is key

Reliable forecasts on current and past lightning phenomena are only possible if a high degree of location accuracy is ensured.

In order to be able to link the malfunction of a high voltage power line with a lightning stroke for example, the geolocation of the damage-inducing lightning stroke should not be far from the line itself. Only in this manner is a reliable correlation possible.

Nowcast’s location accuracy allows for the clear delineation of storm cells. Not only is a statistical accuracy of 75 meters excellent, but the scattering is also extremely low.

In cases of subsequent verification of damage, the importance of location accuracy is self-evident. Only accurate measurements enable a reliable prediction as to whether damage was actually caused by a lightning stroke or by lightning-induced overvoltage. 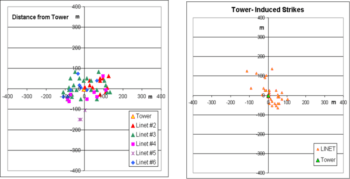 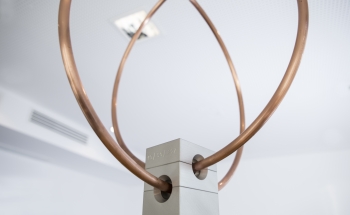 The first lightning-detection systems used the method of angle-bearing. This method is rather inaccurate and creates location errors of several kilometers due to various interferences. With the availability of GPS time signals, the time-of-arrival method became state-of-the-art – a technique which is considerably more exact and normally allows for a precision level of around 400 m.

Network manufacturers always specify the average statistical accuracy, but not the scatter around the mean. As such, with conventional commercial measurement networks, the deviation with respect to location errors may continue on the scale of a few kilometers – despite an average accuracy of a few hundred meters for the majority of the lightning strokes.

In many cases, it is of particular importance that no major error occurs in lightning detection. It is for instance, extremely misleading if individual, erroneously located lightning strokes are projected in areas without storm activity and consequently dispatch false predictions of a storm approaching. In order to avoid such location errors, nowcast has developed an efficient technique, allowing for an extremely low scatter of location errors around the mean. The long-standing and continuous use of the nowcast lightning data by the German Meteorological Service (DWD – Deutscher Wetterdienst) has confirmed the effectiveness of our method again and again.