You are here: Home1 / Lightning Detection2 / 3D-measurement of emission height

To date measuring intra-cloud lightning strokes was possible only with extremely elaborate and expensive high frequency measurement systems (VHF/HF). For physical reasons, high frequency sensors need to be positioned much more closely together because high-frequency radiation quickly diminishes in the atmosphere. Consequently, it becomes difficult and extremely expensive to cover large areas.

Systematically recording the height of intra-cloud lightning strokes forms the basis for classifying the severity of storms. For the first time, storm situations can be fully observed and analyzed over the entire life cycle from the formation to the decline. Detecting and determining the height of intra-cloud lightning strokes play a vital role in determining the severity of a storm. Not only the ratio of intra-cloud to cloud-to-ground strokes provides information, but also the height of the thunder cloud: If the average height of a cell increases disproportionately, then a highly convective zone may be expected in which often not only lightning forms, but also hail and heavy rain. This is a clear danger sign for weather services, aviation and industrial facilities which can take in-time preventative measures.

Intra-cloud strokes occur when a sufficient number of strong charge centers with opposite polarity form within a storm cloud. As a consequence, the radiation received by the lightning sensor is emitted from an area which is located several kilometers above the ground in a cloud. As such, the signal propagation delay of intra-cloud strokes from the point of emission within the cloud to the antenna is extended. A cloud-to-ground stroke however, which discharges very close to the ground given the same 2D-position, reaches the antenna faster. Even though the difference in the signal propagation delay is slight, it can nonetheless be reliably detected and recorded using the patented technique if all the components involved in the measurement system have been designed and developed with sufficient precision. To reliably determine the emission height, the sensors should be spaced within 150-200 km of each other.

Alternative methods to differentiate between stroke types are based on analyzing signal shapes and depend on signal height and polarity. Considerable uncertainty in terms of discrimination arises when it comes to weak and positive signals. The nowcast method offers a reliable alternative.

nowcast has been successfully using this 3D-method in real-time operation since 2004 (Reference: Betz et al., “Lightning Detection with 3D-Discrimination of Intracloud and Cloud-to-Ground Discharges”, J. Geophys. Res. Lett., Vol. 31, L11108, doi:10.1029/ 2004GL019821, 2004). No other commercial lightning-detection system in the world offers such versatility. 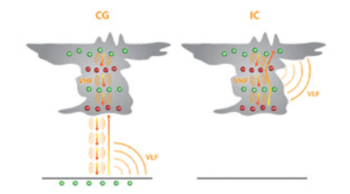